For the last 15 years Brendan Body has
been a computer animator working in film
and television. 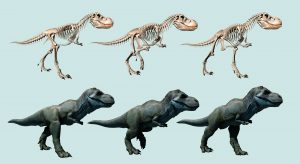 He has worked on popular films such as Harry Potter, The Amazing Spider-man, Pacific Rim, and The Hobbit: The Battle of the Five Armies. Brendan is now teaching the next generation of Scottish animators as a lecturer and researcher at Duncan of
Jordanstone College of Art and Design at the University of Dundee.

In his talk Brendan will discuss his career in animation and give some insights into the world of films and visual effects. He will also talk about his current research; where he will share his knowledge of animal and human anatomy, plus biomechanics, gained throughout his career, and how he will apply this to his latest project – producing some animation for the Natural History Museum’s most recent significant acquisition; a Stegosaurus fossil named ‘Sophie’.

What makes for an authentic facial expression? While there has been a great deal of scientific research examining the psychology of expressions, there has not been much research into the appearance of traditionally animated characters.

Join Robin Sloan of Abertay University on Tuesday 2nd of November at 6pm in The McManus Cafe where he will discuss the process of animating facial expressions, and will demonstrate what studio based practice-research can reveal about the believeability of animated expressions.

Doors open at 5.30pm and beers, wine and food are all served in The McManus Cafe, see here for a full menu. This is a FREE event, but there is limited seating available for 60 people so please do arrive early to avoid disappointment.