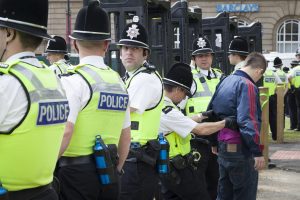 The police practice of stop and search in Scotland was at one time being conducted at a rate about seven times higher than that of the London Metropolitan Police. It was unaccountable, largely unrecorded and mostly ‘ignored’ by political leaders and the media.

That all changed with findings from PhD research in Edinburgh in 2014. Since then, Police Scotland and the academic community have travelled a long, and at times, very bumpy journey of consultation, evaluation, reform and governance. Once the model of what ‘not’ to do in times of challenge, Police Scotland now actively engage with others to develop policy and practice from a stronger evidence base and can serve as a model to other police forces in this regard.

Dr Megan O’Neill as she discussed her role in the stop and search journey in Scotland and explores how researchers can actually change our daily lives.

A blogpost discussing the topics covered at this event and written by Kirsteen is now available at the Bright Green Scotland website.

In the brutality of the recession we have an opportunity to redesign our society for the better. In order to do so however, we must recognise the causes of the recession rooted in law and in our relations with each other, which are often shaped by law. Only then might we stop fuelling economic inequality and invest in a fairer and more sustainable future. This talk by Kirsteen Shields from the School of Law at the University of Dundee, offered a beginners guide to public power and how any individual may influence it.

Our audience really enjoyed this thought provoking talk from Andrea Ross, Professor of Environmental law at the University of Dundee.

In May 2010, the UK Coalition Government set itself the objective of becoming the ‘Greenest Government yet’. But in July 2010 it  announced it was disbanding the Sustainable Development Commission.

By May 2011 it was being criticised in an open letter from 15 diverse organisations of losing its way on environmental issues and the ‘green economy’ and by May 2012 it had still failed to produce a new sustainable development strategy.

Moreover, while the Government appears fixated on using the term ‘sustainable’ regularly, it does so with little regard to the long term health of the planet preferring instead to focus on the ‘sustainability’ of the economy.

In her talk, Andrea highlighted this lack of leadership for sustainable development at the UK level. She also explored various ways of challenging short term thinking as well as promoting and supporting concern for the Earth’s limits.

This event was kindly hosted by the cafe at The McManus: Dundee’s Art Gallery and Museum